Night of the Living Wage 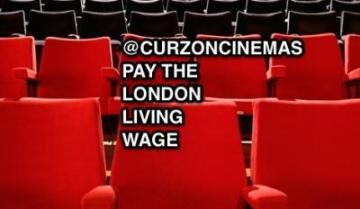 Like one million other people in this country, frontline Curzon workers are employed on zero hour contracts. Those that have been working for more than a few years usually develop a few days work they can rely on, but this informal regularity could be swept away at any time without justification.

Workers across all Curzon cinema chains have had enough. A year ago these young, white-collar workers on insecure contracts became some of the first frontline cinema workers to get organised in this country, and they joined the union BECTU. Now union reps say that some 45 per cent of Curzon workers have joined - no small commitment when it costs £5 a month - and a recent survey across the company's eight cinemas found 70 per cent in favour of the union being recognised. So far 1,500 have signed the petition, including famous directors like Mike Leigh.

Despite this, Curzon's management still refuses to recognise the union. Bosses say that they need to verify the names of union staff members first, but the union doesn't want to hand over names which they feel would put members at risk from retaliation, and have instead called for Curzon to work through ACAS.