A Cheaper Shade of Red (Carpet) 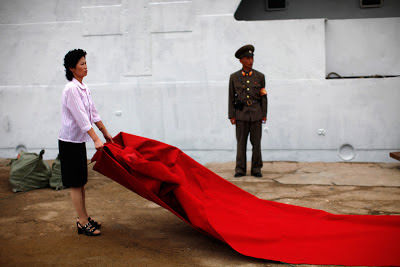 "As they cheered and hooted, they were far more confident than the film actors on display, who seemed ill at ease when they stepped from their cars, like celebrity criminals ferried to a mass trial by jury at the Palais, a full-scale cultural Nuremberg furnished with film clips of the atrocities they had helped to commit."


Cannes, France: stronghold of the xenophobic right all year long, kind host of the clergy of world cinema for a few glamorous days which this year are running the risk of being slightly less glamorous...
The jewelry due to be loaned to stars walking the red carpet has in fact being stolen, report Rhonda Richford and Gary Baumfor for the Hollywood Reporter.

"Chopard jewels worth more than $1 million have been stolen at the Cannes Film Festival, local police confirmed to The Hollywood Reporter on Friday. The jewelry was stolen from the safe in the Suite Novotel Cannes Centre room of a Chopard employee, an American, overnight."