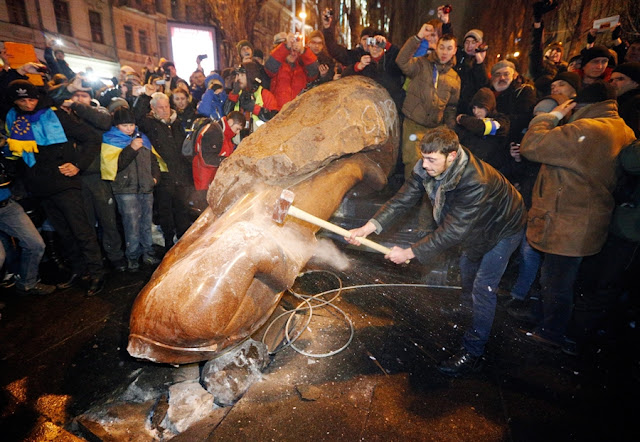 “Truth is absolute, in its relativity.”
— Vladimir Lenin

“It takes hard work to fabricate the truth.”
— Aleksandr Zinov’ev


Ukraine’s fight for freedom made it to Hollywood, Evgeny Afineevsky’s Winter on Fire being nominated for an Oscar for best documentary. Although the term ‘documentary’ might not be the aptest way to describe this film, Winter on Fire has generated the kind of platitudinous pull-quotes Oscar campaigns are made of. With the exceptions of Boris Nelepo’s and Jay Weisberg’s respective filings for Cinema Scope and Variety, Afineevsky’s film has been warmly received by critics seemingly content to see the CNN’s version of the Ukrainian affaire faithfully mirrored in the documentary. The story is simple and idealistic enough: the ‘people’ of Ukraine took to the streets of Kiev to protest their government’s decision not to sign an agreement strengthening its economic relations with the European Union (lately known for its kindly treatment of such weaker members such as Greece). Then-president Viktor Yanukovych sent in the riot police to beat to a pulp anyone in Maidan, but the heroic people of Ukraine fought back and finally triumphed. Yanukovych flinched and fled to Russia, to the Ukrainian’s unbridled joy. That, simplistic though it sounds, is the synopsis of Winter on Fire (whose crew members are now suing Afineevsky), not to mention the version of the ‘Ukrainian Revolution’ reported by the vast majority of mainstream media throughout the democratic Western world.

Is all this true? Yes, approximately. Is it all there is to the story? Definitely not. What’s curious about Winter on Fire and other documentaries to emerge from Ukraine’s recent turmoil is that they all systematically leave out some certain unpleasantries that are not at all peripheral to the overall narrative. Very much like the nationalist rhetoric and sloganeering they uncritically capture, Winter on Fire, Sergei Loznitsa’s Maidan (2014) and Chad Gracia’s ridiculously hyperbolic The Russian Woodpecker (2015) resort to absolutist simplifications with apparent ease. When neither journalists nor film directors are able (or willing?) to produce historical contextualisation and political analysis, it is no coincidence that audiences and, most troublingly critics, tend to believe what they are spoon-fed.