A Love of UIQ by Félix Guattari 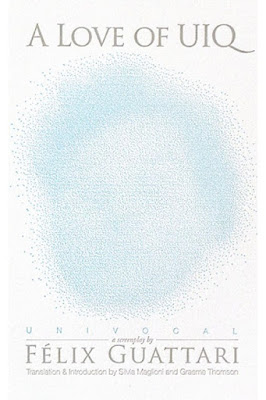 “There will soon be nothing more than self-communicating zombies, whose lone umbilical relay will be their own feedback image – electronic avatars of dead shadows perpetually retelling their own story.”


Around 1979 the American filmmaker Robert Kramer and the French schizo-analyst Félix Guattari started working together on a film about two Italian fugitives from the Italian Autonomia Movement, Latitante. The film, which was to star Pier Paolo Pasolini's regular actress Laura Betti, was meant to be a sort of first person collective reflection on the finitude and fragility of the body, “opposing the enormous weight of things-as-they-are, systematically defined by vast power.” A film about the intimacy of resistance. Somewhere along the way the film morphed into a significantly different creature, the science fiction flick A Love of UIQ, a formal shift (sub)consciously informed by the wider political changes taking place off screen: from the grand ideological narratives of the 60s and 70s, to the videodrome mutations that would characterize countercultural developments in the 80s.


Guattari's narrative somehow bridges these two currents, borrowing the resolve from the former and the conceptual tools from the latter. The headless body of workerism with its absence of political organs prefigured some of the most politicized forms of cyberpunk and its anti-authoritarianism. Hamburg's early incarnation of the Chaos Computer Club, underground zines like Hackerfür Moskau or the British Vague, the militant sci-fi of Italy's editorial collective Un' Ambigua Utopia or the galactrotskyist novels of Mack Reynolds, YIPL or the soviet cyber-fantasy flick Kin-dza-dza (1986) and other undetected influences all seep through Guattari's unfilmed script. At the time of the first draft (1980-81), Kramer was to direct the film and Guattari himself wanted it to be produced in Hollywood. He had in fact sent a copy to Michael Philips, the producer of Close Encounters of the Third Kind and Taxi Driver, who took it to be “too political” for US audiences. A second draft, still co-written with Kramer, dates back to 1983 while the final version that has just been published in English for the first time was completed by Guattari alone around 1986. Kramer himself will flirt with science-fictional tropes in his 1985 Diesel, his first and last foray into commercial filmmaking, a film that might have been aesthetically influenced by his work with Guattari, but bears none of its narrative characteristics.