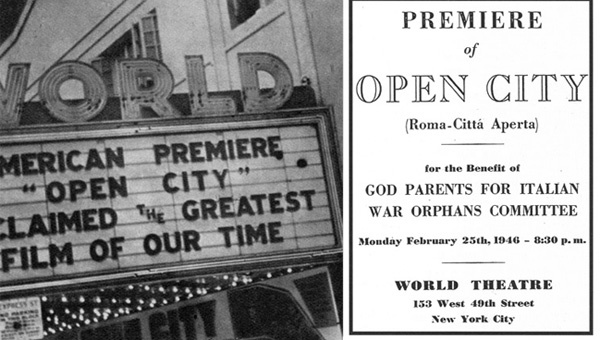 Two years before Roberto Rossellini started shooting Rome, Open City on January 18, 1945, the famed Italian director had just completed another war trilogy. Inaugurated with the 1941 navy flick The White Ship, followed a year later by A Pilot Returns, and crowned in 1943 with Man of the Cross, the trilogy celebrated the Italian army’s questionable exploits in the war fought on the side of Nazi Germany. Awarded the National Fascist Party Award at the ninth edition of the Venice Film Festival where the film premiered, The White Ship extolled the virtues of the Italian navy and its fearless German ally while depicting the English as little more than barbaric cowards. Based on a story by Benito Mussolini’s son Vittorio and produced by the company he presided over, the Italian Cinematographic Alliance (ACI), A Pilot Returns begins in the sky’s blue heights where an Italian pilot is downed and captured by the English in Greece only to valiantly escape to rejoin the Fascist army’s ranks (whose military record in WWII went from one humiliating defeat to another). Like the film that would follow it, Man of the Cross features a priest in a prominent role, only this time our heroic man of the cloth is not fighting the Nazis but the godless Red Army (at a time when Franklin D. Roosevelt was praising it for its “magnificent achievements, unsurpassed in all history” in the war against Hitler’s Werhmacht).

Though on its face opposite politically, Rossellini’s following trilogy—Rome, Open City, Paisan (1946), and Germany Year Zero (1948), recently released in a Criterion Blu-ray box—shares with the first one a similar penchant for the wishful recreation of (very recent) historical events. Universally praised for their perceived authenticity, the films that effectively constitute the foundation of Italian neorealism—a supposedly genuine representation of “things as they really were”—present a highly debatable version of reality, historical and otherwise. “Italy had been the Third Reich’s main European ally, but this film redeemed the Italians in the victors’ eyes and also in their own: they too had fought Nazism,” remarks the voiceover in the 2006 documentary Once Upon a Time…Rome Open City by Marie Genie and Serge July (included in the extras of the Criterion box). As the Italian historian Claudio Pavone spent his life pointing out and proving, the nationalist idea of the majority of Italians having disapproved of, and fought against, Fascism was a myth. This was a very carefully constructed myth, one which neorealism helped to cement into the collective imagination of Italians and their new allies (willing to overlook their former enemy’s past in exchange for their political loyalty). One thing Rossellini’s trilogy faithfully mirrors is the transformist zeal with which Italy, having shifted alliances, swept its recent past under the carpet and contrived a new national reputation. This reputation was founded on an unseemly feeling of victimhood and an (un)conscious determination to bury deep 20 years of Fascism along with the responsibilities for its crimes.