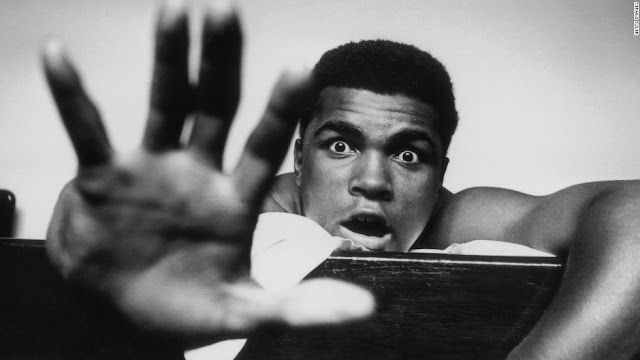 “Black is not a colour, it’s an attitude.”


Heavyweight champion in the fight for racial equality and social justice, poet, rhapsodic loudmouth, adorable smart-ass, magician, wisecracker extraordinaire, Muhammad Ali, né Cassius Marcellus Clay, Jr., had survived his own death long before dying. No screen, big or small, will ever capture, let alone contain his boundless genius, for in Ali’s case the ring was but a launchpad to the world stage. Rather than simply a man history will remember him as a demiurge of his own time, the creator and protagonist of outsized dreams of liberation. There is nothing to be written or said about Ali’s relationship with cinema, for the man himself was cinema. Very much like the seventh art at its uncompromising best, Ali transcended reality to project and inspire something nobler and more beautiful than the injustice of life on earth. A mythopoetic figure necessarily larger than life, Ali guided the steps of an exploited humanity at a time when it was still thinkable to demand the unthinkable. He conducted his life-long fight against the forces of oppression on multiple fronts, always on his own terms. As stylish and implacable in a television studio as he was in the boxing ring, his adversarial raps against the privileged white condescension of a William F. Buckley or a David Frost are as memorable as his jabs against Joe Frazier or George Foreman.